When you use virtualization software such as Microsoft Virtual PC, VMWare, etc. Most of the time, you’ll duplicate (copy and paste) Windows virtual disk for creating a new system instead of grab a Windows CD and install it from scratch because it’s really fast and simple. But the problem occured on the duplicated disk that it contains the same Computer Security Identifier (SID) with the original so that if you try to join the domain on the new system, you can’t login to the domain and the error message show as below:

"The system cannot log you on due to the following error: The name or security ID (SID) of the domain specified is inconsistent with the trust information for that domain." 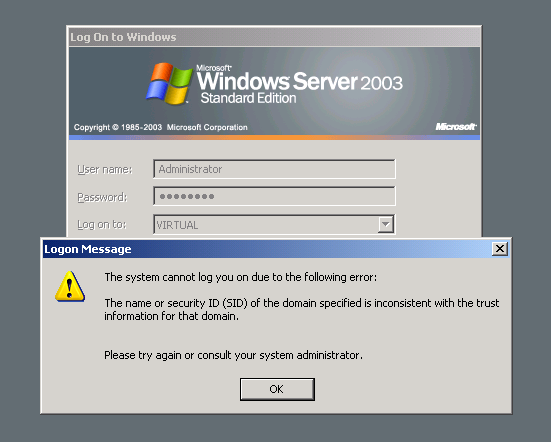 The event log also show error as:
“The computer or domain computername trusts domain domainname. This may be an indirect trust. However, computername and domainname have the same security identifier. NT should be reinstalled on domainname or computername. ” 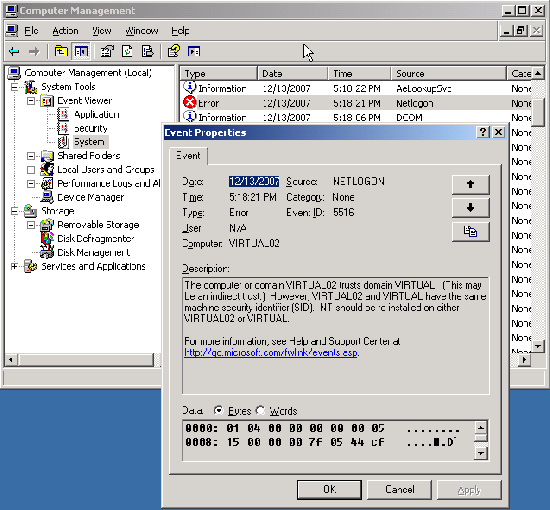 Microsoft states that “Computers running the Windows operating system use a Security ID (SID) to uniquely identify themselves. When you use disk-duplicating software, it is important to take steps to ensure the uniqueness of these Security IDs.”

Note: The problem will not occured if you use System Preparation Tool (Sysprep.exe) or some system duplication tools such as Symantec’s Ghost, Altiris’s RapiDeploy, etc. These tools will change a computer’s SID after a system has been cloned automatically.

You can solve the problem by run newsid program on the duplicated system. The program will generates new sid for the sytem so that it’s no longer duplicate with the original one.